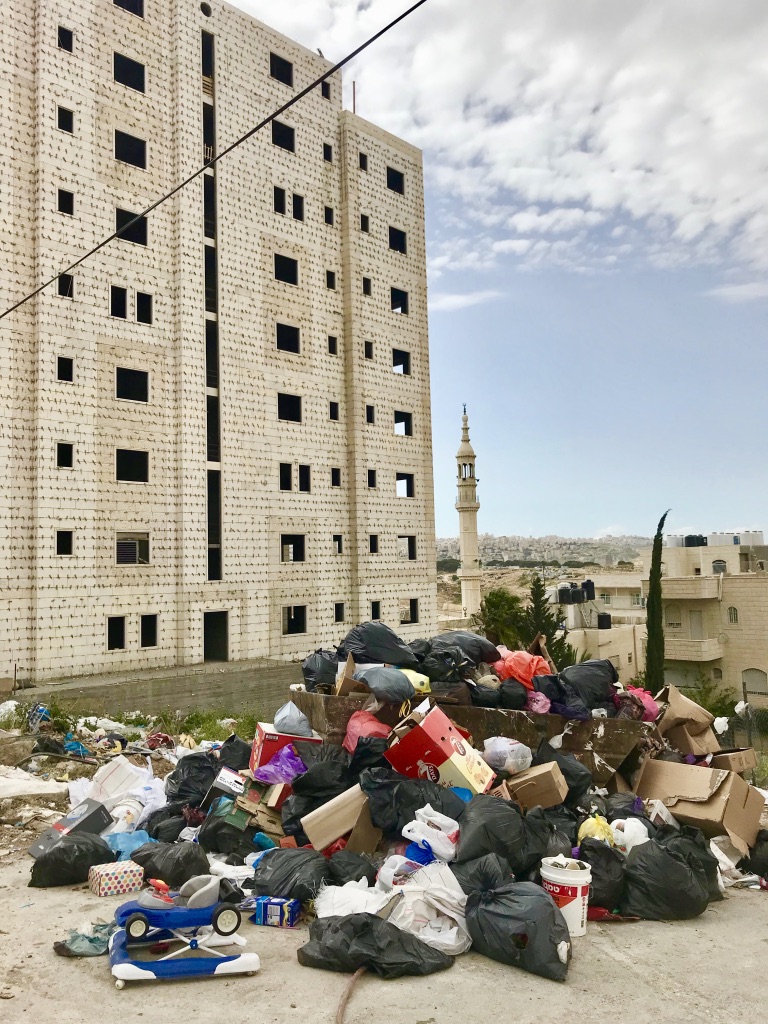 It is difficult not to notice the prevalent environmental issues in Palestine, especially those related to waste. Solid waste management is seen as one of the major sustainability challenges in the country.* Local municipalities lack the resources to deal properly with waste, which much too often results in overfilled garbage containers and trashed streets. The absence of waste management and sorting regulations in Palestine constitutes an imminent threat to an already fragile environment and complicates the efforts to take care of the huge negative effects of trash.

When I moved back to Palestine in 2017, I was overwhelmed by the amount of trash I had to face every time I walked the streets. These horrific scenes of trash piles and arbitrary disposal dumps have an adverse effect on the mental and psychological state of the population and create a culture of helplessness and despair.

Not only was this trash an aesthetic problem, but it also presented a tremendous hazard for the environment, contributing to climate change.

At the same time, however, I began to think about my own habits, which also produced a lot of waste. Therefore, I decided to start with myself and reduce my trash as much as I possibly could. Soon enough, I became aware of the global zero-waste movement, a philosophy that aims to prevent the trash from ending up in landfills and oceans. The zero-waste concept is based on the 5Rs: Refusing things that are packaged in plastic, Reducing overall consumption, Reusing what is available instead of opting for disposables, Recycling whatever trash is left, and Rotting the food waste produced from your kitchen through composting.

Ever since adopting a zero-waste mindset, I have considerably reduced my household waste by finding alternatives to waste-producing habits in daily life. By making simple swaps, I realized that a little goes a long way.

On top of the environmental benefits of this lifestyle, I became healthier. In an attempt to combat packaging, I started to make my own personal hygiene and cleaning products at home, using natural and safe ingredients. For food, I opted for fresh produce bought in bulk instead of canned and pre-packaged food. This shift towards a more conscious, sustainable way of living soon started making sense financially. Making my own products from scratch, reducing my consumption, and reusing what I had resulted in a calculated annual saving of over US$ 2,500.

In view of the Israeli land grab in the West Bank for settlement building, road construction, and military installations, land is disappearing before our eyes. In the context of Palestine, the notion of land is significant. That’s why it is imperative that Palestinians strive to save the remaining limited area, because in the end, what is the point of seeking freedom for the nation without protecting its nature?